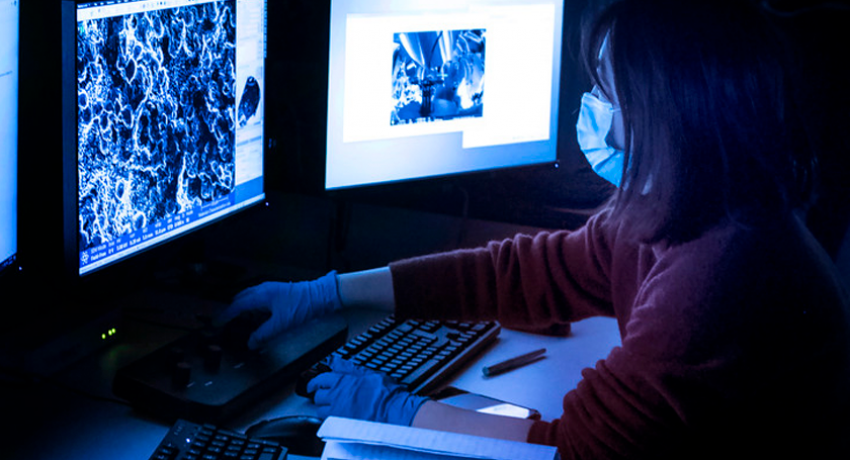 From detecting subatomic particles that usher in new discoveries in astrophysics at the South Pole to driving economic development in communities across Pennsylvania, Penn State research is transforming society by furthering our understanding of the world and helping people in our own backyard, according to Penn State President Eric J. Barron.

Barron shared the impact of innovative research and the role the University’s research community of faculty, staff and students plays in the creation of new knowledge and workforce preparation in a presentation to the Board of Trustees at its Friday (Sept. 17) meeting.

“As a driver of progress, Penn State is a leader among our peers in our research impact, breadth and ability to inspire and attract innovators with diverse perspectives and talent,” Barron said. “The scale and scope of our research activities also are important measurements of our standing among our peer institutions nationally and around the world.”

Among many notable distinctions, the University indirectly supported more than 2,500 jobs in Pennsylvania and has generated nearly $200 million in economic impact for the state since 2015 through technology transfer, the process in which new inventions and innovations created at universities are turned into commercial products. Barron shared that 100 Pennsylvania companies alone conduct research with Penn State.

In addition, Penn State has awarded the most undergraduate degrees in STEM fields — at 6,473 in 2019-20 — in the U.S. and is one of only four universities to appear in both the STEM and business top 20s lists. Also, more than 110 Penn State faculty members have been elected to the National Academies of Engineering, Science and Medicine; American Academy of Arts and Sciences; and American Association for the Advancement of Science — which recognize scientists and researchers for top achievements in original research.

“The breadth and depth of our innovation wouldn’t be possible without the many talented people across our campuses who dedicate their careers to understanding our world and identifying solutions to our society’s greatest challenges,” Barron said. “Our University-wide commitment to interdisciplinary collaboration drives our partnerships with business and industry and helps us to train the next generations of scientists and leaders to make their impact.”

At the meeting, Barron welcomed three high-achieving researchers to discuss their work, including Joan Redwing, professor of materials science and engineering and electrical engineering and director of the 2D Crystal Consortium and National Science Foundation-funded Materials Innovation Platform; Kriston Ramdass, an aerospace engineering master’s student; and Laura Guay, a senior who is majoring in biobehavioral health and French and Francophone studies.

At the meeting, Barron shared a variety of examples outlining the positive impact of research on:

Penn State is the top public university in Pennsylvania for industry-sponsored research, according to Barron. The University conducts more industry-sponsored research than any other Pennsylvania public college or university and has received more than $20 million per year for the past five years from industries sponsoring such research. About 200 companies — from Corning to 3M to Lockheed Martin — sponsor projects at the University.

Penn State serves as a critical and strategic partner; collaborator in specialized, high-end facilities; and as a source of economic impact by reducing expenses and creating jobs.

For example, Penn State is Volvo’s first and only “academic preferred partner” for research in the U.S, and one of only two on-site university research park locations; the other is located in Sweden. Ongoing sponsored research is focused on hydrogen fuel and production; batteries, charging stations and infrastructure; and digitization, artificial intelligence and machine learning.

In addition, Penn State researchers are conducting research sponsored by NASDAQ, JP Morgan and Wells Fargo to harness big data to support equitable entrepreneurship. With a cohort of more than 30,000 entrepreneurs, Penn State is leading the effort, with collaboration from Stanford, Harvard, Duke, Pitt and Yale, to tailor solutions to support women entrepreneurs and those from underrepresented groups.

The University consistently ranks near the top in annual spending on science and engineering research and is tied in the top position for having the most disciplines ranked in the top ten nationally for research expenditures.

As an example, the Two-Dimensional Crystal Consortium (2DCC) is nationally renowned, having received one of only four available awards in the United States. This year, the National Science Foundation renewed funding for 2DCC at $20.1 million over 5 years, an increase of 13% above the initial award in 2016. The state-of-the-art resource is also used by other academic institutions and businesses.

As regional research hubs, Penn State’s campuses help disseminate research and are magnets for collaboration — with roughly 95.6% of the state’s residents living within a 30-mile radius of a campus.

For example, Glenn Sterner, assistant professor of criminal justice at Penn State Abington, is the lead in a three-state project with Iowa and New York funded by the National Institute of Justice to fight the opioid epidemic. Sterner is leading research to develop intelligence networks to combat the opioid crisis in rural communities in Pennsylvania and across the nation, as well as to address substance use issues and to develop strategies to disrupt opioid and other drug-related markets.

Students and the workforce

Attending a university as large and research-oriented as Penn State provides countless opportunities for students to gain leadership experience and set themselves up for career success. For example, Penn State is tied with MIT (No. 5) by corporate recruiters for preparing students for success after graduation, and over the past five years, undergraduate students have participated in nearly 13,000 research course experiences.

A variety of funding support and training grants are available to students, including through Summer Founders, Erickson Discovery Grants and the Student Engagement Network, as well as through federal funds and Penn State’s interdisciplinary institutes.

The University strives to attract the most promising undergraduate and graduate students and invest in their development. Students like Ramdass and Guay, who presented during the meeting, are among the many students for whom a Penn State education has helped to open doors to a range of career opportunities, according to Barron.

Ramdass, who will graduate this fall with a master’s in engineering, interned at Moog Space and Defense where he contributed to NASA’s Orion Spacecraft crew module. In 2021, he was selected from 533 nominations to receive the prestigious Aviation Week Network’s 20 Twenties Award. Guay, who has conducted research in Senegal and with the U.S. Embassy in the Democratic Republic of Congo, was named a 2020 United Nations Educational, Scientific and Cultural Organization (UNESCO) Fellow. She will also be graduating this fall.

“Research is truly the foundation of all things innovation — and innovation inspires the future,” said Ramdass during the meeting. “Therefore, when Penn Staters lead in research, Penn Staters inspire the future.”